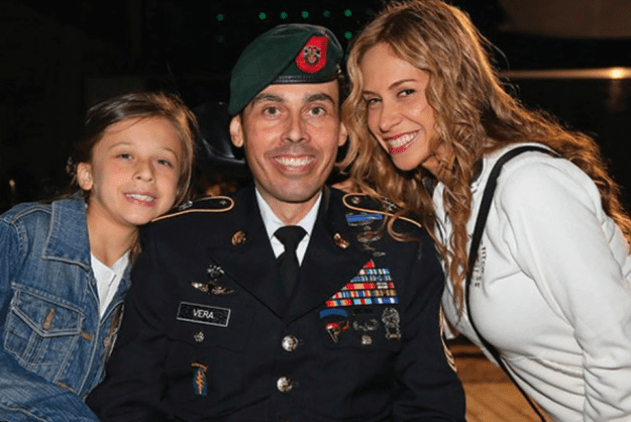 Master Sergeant (MSG) George Vera was briefly in the 101st Airborne, then  went through Special Forces training. Over the next decade, more than 10 deployments around the globe saw him on the front lines of the battle for freedom. During his fifth deployment to Afghanistan, MSG Vera was attached to the Combined Joint Special Operations Task Force-Afghanistan. In the first week of August 2015, a group of insurgents attempted to overrun the camp where he was assigned. At the end of the hour and a half long gun battle, MSG Vera was shot four times suffering a spinal injury that left him paralyzed from the waist down. After extensive and repeated surgeries, MSG Vera continues his rehabilitation. Thanks to patriotic supporters, Soldier’s Wish was able to partner with Rocket Mobility to give MSG Vera an all-terrain tracked wheelchair at the Tree Town Festival in Forest City, Iowa, in May of 2016.  The all-terrain tracked wheelchair will allow MSG Vera to continue the  outdoor activities he loves so much. We cannot replace what he lost, but together we can give him something to look forward to as he continues his rehabilitation program  ... 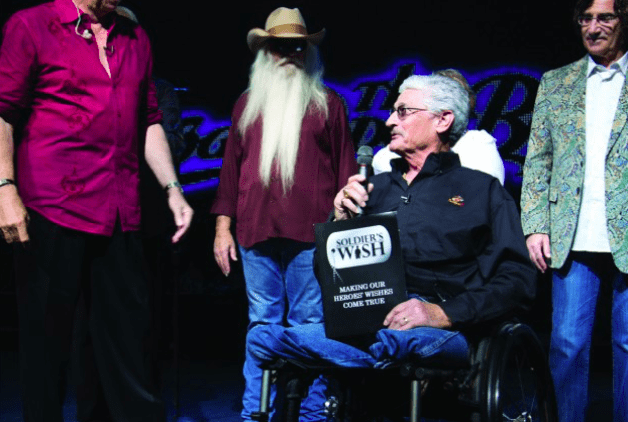 Eddie Beesley was not even 20 years old when a landmine explosion in Vietnam claimed the use of both his legs. Since that time, Eddie has become an advocate for other injured soldiers, sharing much of his time and his musical talent with his fellow veterans. Writing and recording music helped keep Eddie going after his injury, but he felt his reach could be farther, to help even more wounded heroes. We stepped in and joined forces with The Oak Ridge Boys to help Eddie reach those fellow heroes he previously could not. Eddie wanted to help other wounded heroes overcome the pain of the past through the power of music. Now he can.  ... 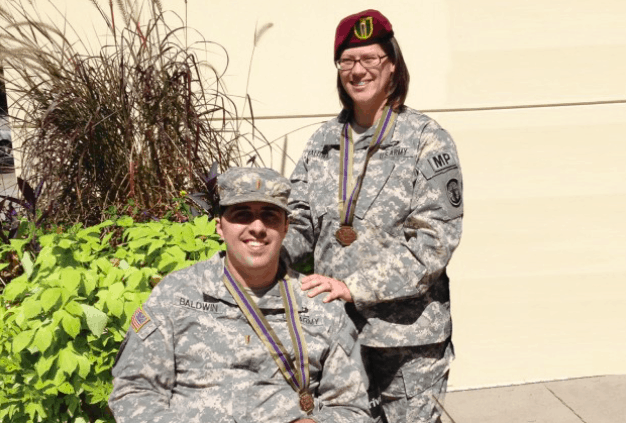 2LT Edward Baldwin was critically injured in an accident that claimed the use of his arm and a leg, as well as the life of the girl he has raised since birth. Confined to a wheelchair, Ed’s life became increasingly bleak, as his family’s home was not wheelchair-accessible. Facing an inevitable and expensive move, the Baldwins started to lose faith after already losing so much. Soldier’s Wish, with the help of countless volunteers, stepped in to restore hope to the Baldwins' lives by renovating their home to accommodate Ed’s wheelchair. We have helped a family that was once shattered to put the pieces back together again. The steps to their house that once posed an obstacle are an obstacle no more  ... 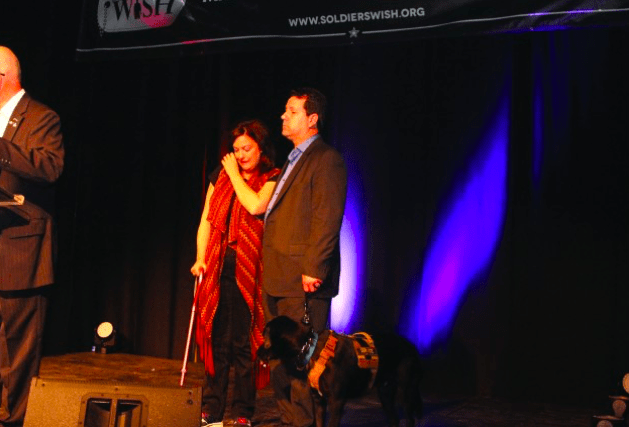 Almost thirty years of service in the Army have taken a heavy toll on MSG Christian McIntosh. Chris has endured many combat injuries during his time in Special Operations and is now in the process of medical retirement.  In addition to the toll that service takes on military families, the McIntoshs were dealt another blow when Chris's wife, Susanna, suffered a serious work injury. The accident broke both of her legs, and faced her with the possibility of amputation. Even worse, the accident cut their already struggling income by two-thirds. As if this was not enough for any family to endure, their family was shattered in June of 2015 when Chris and Susanna's eighteen-year-old son was shot and killed. The mounting bills and expenses, the reduced income, and their great loss left the family hanging on for dear life. At the Soldier’s Wish annual Night of Honor, Chris and Susanna were presented with a Wish for $7,500.00 to make much needed repairs to their Jeep, as well as to install a chairlift that allows Susanna access to the second floor of their home without the assistance of someone else. By giving back to this courageous family in this small way, all of the friends and supporters of Soldier's Wish are expressing their gratitude and appreciation for Chris's service, and for the many sacrifices he and his family have made over the years.  ... 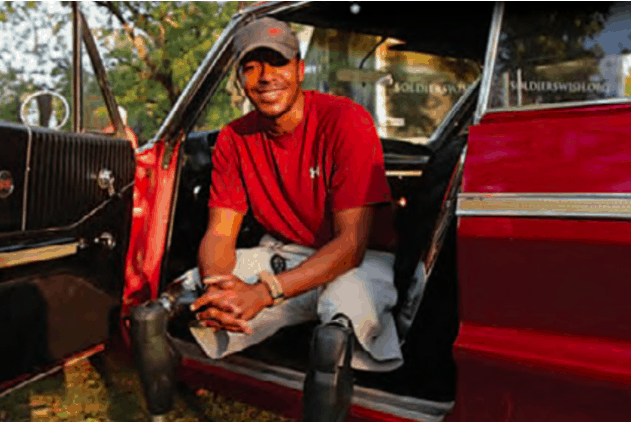 An IED explosion in Afghanistan stole Legrand’s legs, but not his spirit. He dreamed of driving the 1964 Chevy Impala replica he and his father worked together to rebuild. The dream car sat dormant ... 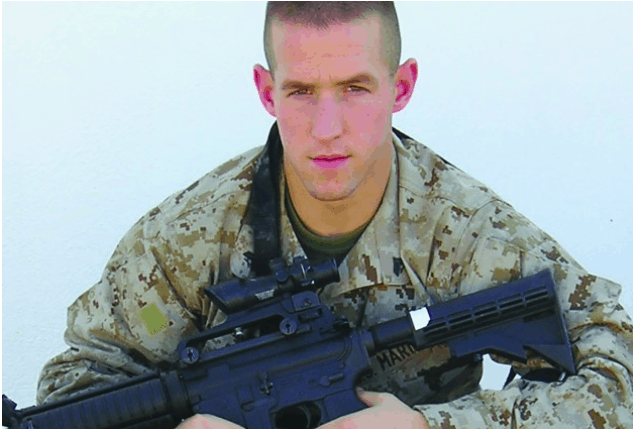 Our hero, Sgt. Kevin B. Balduf of Nashville, Tennessee wanted to be a soldier since he was in elementary school—watching military movies with his twin brother, Kyle and dressing in camo clothing. He was assigned to 8th Communications Battalion, II Marine Expeditionary Force, Camp Lejeune, N.C. Kevin served in Iraq and was in his second deployment to Afghanistan when he was killed on May 12th in Helmand province, Afghanistan at the age of 27. He received the Bronze Star for bravery during his first deployment. Kevin is survived by his wife and two young daughters. In honor of Kevin’s ultimate sacrifice, we pay tribute to his life by granting a wish to his mother, Jenny Newsom.  Jenny adores her grandchildren, who live in Maine, and Soldier’s Wish is grateful to arrange a special visit with them.... 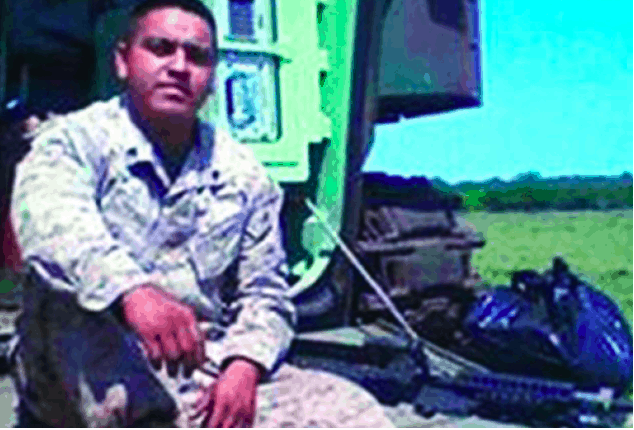 Soldier’s Wish has stepped forward to assist the family of Marine Corporal Armando Torres who continues to be held captive in Mexico since his kidnapping in May. We have received more requests to help the Torres family than for any other individual in the history of Soldier’s Wish. This story has really struck a chord in the hearts of those who love and appreciate the sacrifices made by the members of our Armed Forces. We are delighted to help the Torres family in every way we can as they wait for the safe return of this American hero.  At the family’s request, Soldier’s Wish has raised awareness in Congress about this terrible situation and assisted Corporal Torres’ mother by flying her to Texas to help her daughter-in-law care for the children during this difficult period of waiting.  ... 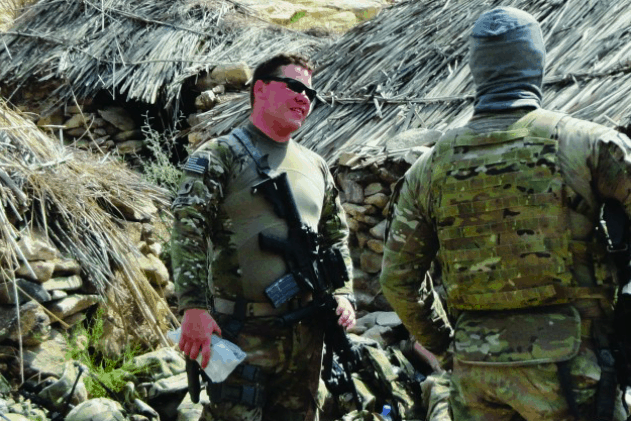 On May 20, 2013 SGT EH Pittman - knowing a massive storm was bearing down on the town of Moore, Oklahoma and the 7-Eleven where he worked - arrived to work early concerned for the safety and well-being of his coworkers. After realizing that his store was in the direct path of an F5 tornado, he knew that there was no time to evacuate his 3 coworkers and 4 customers (including a woman and her baby). SGT Pittman took immediate action that would save lives. He guided everyone into the restroom and unto the floor, where he covered some of them with his own body - serving as a shield - and held on to others serving as an anchors. The walls and roof caved in on then from the direct hit to the store.  SGT Pittman's heroic measures saved lives in the store that day, but not without a price. He received great bodily injury, including a puncture near his spine and numerous contusions and deep lacerations. SGT Pittman's resilience and hope for the future exemplifies the spirit of a warrior.  SGT Pittman's heroism and disregard for his own well-being in the face of extreme danger saved lives that day. Soldier's Wish and Central National Bank have awarded SGT Pittman with $5,000 to help meet his immediate needs.  ...