The Battalion | THEBATT.com | By Matthew Jacobs 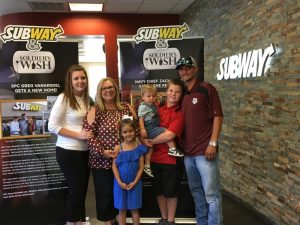 Aggies once again rose up to take care of one of their own two weeks ago in helping to cover the costs of housing damage for a veteran student and his family.

Texas A&M junior Kevin Jensen, a Purple Heart recipient who was injured while serving in the Army in Afghanistan, experienced thousands of dollars in damage last year to the home he shares with his wife and three children. The Texas A&M University Veteran Resource and Support Center worked with the veteran foundation Soldier’s Wish and local Subway restaurants to give a gift of $5,000 to Jensen and his family toward repairing their home.

In April of 2016, Jensen’s home was hit with Houston’s “Tax Day flood,” during which the rainfall in the Cypress area broke October 1994, October 1998 and April 2009 flood levels according to Space City Weather. During the flood, Jensen’s family experienced extensive water damage to the roof of their 3,700 square-foot home, and his wife and three children were relocated to temporary housing.

“After the house was destroyed, the insurance denied our claim,” Jensen said. “At this point we have started rebuilding our home … I have been personally commuting three hours a day to continue my schooling at TAMU due to being relocated so far from the campus.”

Col. Jerry Smith of the Texas A&M University Veterans Resource and Support Center said the needs of Jensen and his family fell outside the resource center’s ability to help with campus resources, but just a few hours after Jensen described his situation, a Soldier’s Wish Foundation volunteer called.

“Jensen … was in my office a couple of weeks ago. It got to a point where they just weren’t going to have enough financial resources to keep doing this on their own,” Smith said. “It wasn’t but a few hours later and this gentleman named Mark Ochsenbein called and said Soldier’s Wish is partnered with Subway and they are looking to help some wishes come true.”

According to their website, the goal of the Soldier’s Wish Foundation is to identify unmet needs of veterans and provides resources to meet those needs so veterans can live a normal and productive lives.

“We meet the needs of our service members — whatever service they’re in. They can be veterans or on active duty,” Ochsenbein said. “Soldier’s Wish and Subway teamed up to raise funds for our veterans and our military personnel. Because I know the education system, I knew that there is typically a Veteran Affairs office [on college campuses] … and I contacted Col. Jerry Smith’s office.”

Jensen said the donation will have a huge impact on his family’s efforts to rebuild.

“The money that we were given by Soldier’s Wish and Subway … is a tremendous help as we try and get back into our home. There is so much that needs to be done and this money will help us get closer in the end,” Jensen said.